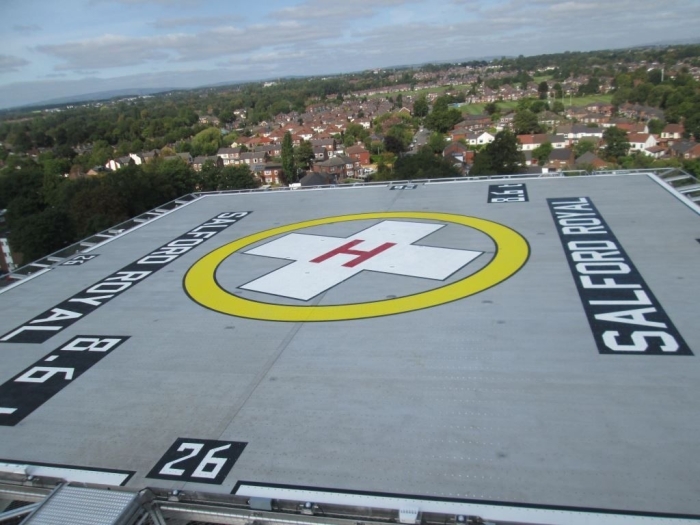 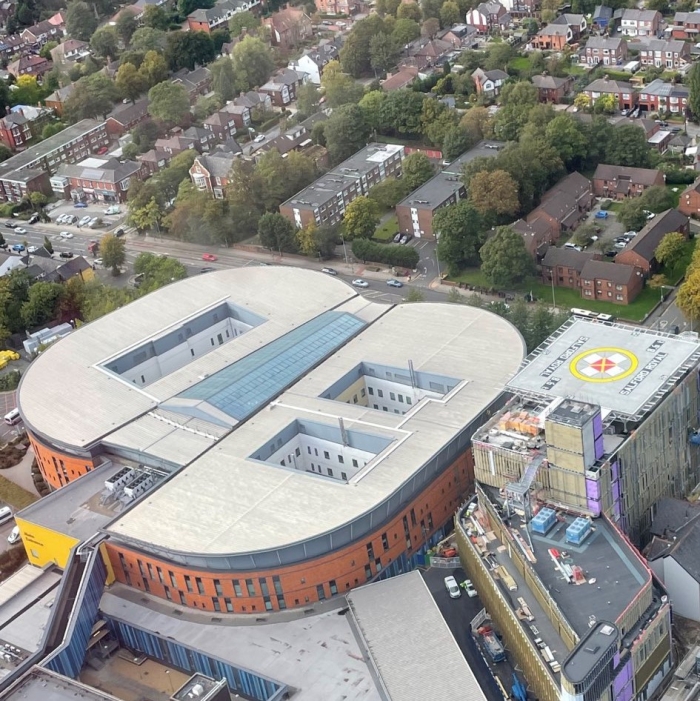 Thanks to a £2million donation from the HELP Appeal, the only charity in the country dedicated to funding NHS hospital helipads, the construction of a state-of-the-art helipad on top of the first standalone Major Trauma Hospital in the UK, at Salford Royal Hospital, is now complete.

The donation, made from the HELP Appeal to NorthCare Charity, the official charity of Northern Care Alliance NHS Foundation Trust, has funded the entire development of one of the first rooftop helipads in the country, with direct access to a lift down to the Emergency Department, saving valuable time for critically ill patients needing lifesaving treatment.

Air ambulance patients currently must land in a nearby sports field and are then transported to the Emergency Department by road ambulance. It is anticipated that having an on-site helipad at Salford Royal Hospital could save 20 vital minutes for a patient. The helipad is due to become operational when the Major Trauma Hospital opens in June 2023, with an anticipated 360 landings on the helipad every year.

The helipad has been made purely from aluminium, including the support structure, and has been constructed with almost 1,000 bolts, so it is able to hold a colossal 8600kg, the estimated weight of a Tyrannosaurus Rex.

Robert Bertram, Chief Executive of the HELP Appeal said, “Hospitals and helicopters help to save lives. But a helipad also plays a key role by linking the two together so seriously ill patients can be transferred quickly and seamlessly to the Emergency Department after landing in an air ambulance. This is why we had no hesitation in making the £2million donation, which was only made possible by our supporters.”

“We’re delighted to have received support from the HELP Appeal to construct the helipad, which will have a huge impact on our ability to treat the most seriously injured patients from across the northwest”, said Dr. Eimhear Quinn, Emergency Department Consultant and Air Ambulance Doctor.

Stuart Loftus, Construction Manager at BAM Construction Ltd said, “the team are extremely proud that the helipad has been completed on time and to our high standards. It’s another milestone towards the Major Trauma Hospital being ready to accept patients by Summer 2023.

“It’s testament to the hard work of the team here at BAM that work on the hospital is progressing on time, and we’re pleased to be leading a project that will make such a difference to patients in Greater Manchester.”

Dr. Eimhear Quinn adds, “Fundraising continues to develop the RAPTOR Theatre within the Major Trauma Hospital, ensuring we are able to provide the best possible care for those with multi-trauma injuries, increasing their chances of survival and recovery”.

For more information of the charity’s work for the Major Trauma Hospital, visit northcarecharity.org/RAPTOR.